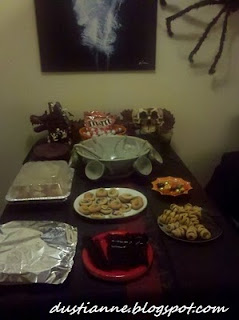 As what I have said on my previous post, hubby and I throw a costume party on our place. Though it end up with only two people who came since the rest of his friends were working and mine as well. We still had fun and I honestly enjoyed my second Halloween here. We have actually lots of food for all four of us since two of our friends bring some and they also helped us prepare food. We baked cookies and cake. I cooked chicken adobo and pancit palabok, mummy hotdog and little smookies. We don't have any trick or treaters around our apartment and now I'm worried who's gonna eat the bowl full of  candies that we have...waaa!(lol). After we ate, we hang out for a while and went to my in laws house for us to do trick or treat around the neighborhood. As soon as we walked around the area, we stopped by to this very cool  house, they made their  front yard  into a graveyard looking. It was decorated of Halloween spooky stuff. It looks so haunted. Suddenly, they were couple cars driving around the street and we didn't thought that they gonna throw an egg towards us. They hit me and hubby. So hubby was pretty pissed with these mean people and started to chase them. Unfortunately, the cars speed up and gone quick.
As what hubby told me earlier that day, there will be lots of crazy and drunk people out there doing stupid stuff so we have to be careful. Yeah, now i know (lol). I just wish that we catch those people and teach them lesson they deserved. 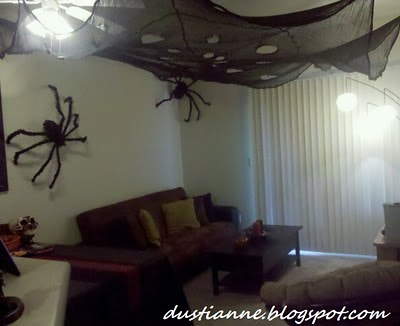 The photo above is our living room that we decorated with two big spiders on the wall while the web was on the ceiling. And the picture below shows us wearing costume. Hubby as Mr. Grim Ripper and mine as a witch. Two of our friends were like zombie  and a zombie patient. 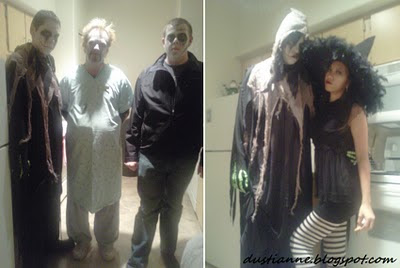