My hubby's aunt and uncle had a fantastic vacation at Disneyland month ago. A week before they fly to California, we were talking about their incoming trip and I told her  to take bunch of pictures for me to see especially princess Jasmin in particular. I know she's not really a fan into princesses but she told me they will try the best they can :).
The day they arrived in town, she called us and we visited her to work. Aside from the pictures they took, they also handed me this Minnie's cupcake mix and this very cool  Jasmin pin . Though I never ask them to get me something from Disney land but I was thankful for their effort of getting it for me.

I hope one of these days, hubby and I will have a trip down there. Thinking the Disney word alone makes me excited to experience the land of fairies and fantasies in a real world. 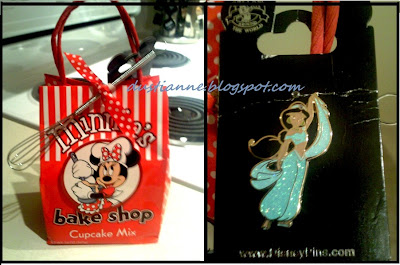 Posted by dustianne at 6:26 PM