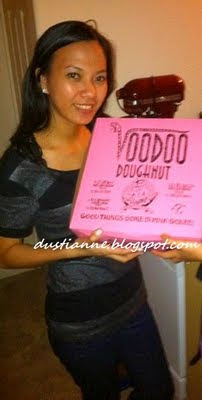 We had our day off yesterday and hubby, myself and our friends went to Voodoo Doughnuts. Just in case you guys don't know, it is a doughnut shop which is popular in the city of Portland. It is well-known for its unusual donuts, uncommon decoration of its shop and its pink boxes which feature the company's logo and drawings of voodoo priests. The shop was featured to a lot of television shows like Anthony Bourdain: No Reservation, Man Vs Food. Doughnut Paradise, etc. I considered this as one of Portland's tourist attraction for its uniqueness. And if you are in love with someone and wanted to get married, they also offer legal wedding services inside the shop. Complete with doughnuts and coffee for the reception...lol. 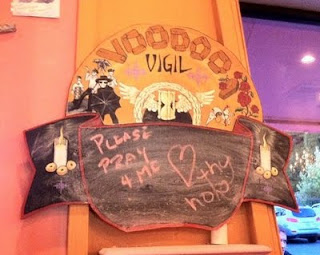 They have a lot of varieties of doughnut you can choose from. Some of those caught my attention for its funny names like "cock and balls doughnut" which is shaped by its name which has cream filled balls.  The "Captain My Captain" doughnut, featuring vanilla frosting and Captain Crunch cereal. "Dirt" raised doughnut covered with vanilla frosting and Oreo cookies.  "Old Dirty Bastard" raised doughnut covered with chocolate frosting and crushed Oreo cookies, and drizzled with peanut butter. Gay bar, Triple chocolate penetration, and many more. And my favorite one is the "Apple Fritter"  which is a fried dough with apple chunks and cinnamon sugar covered in a glaze...Yum! 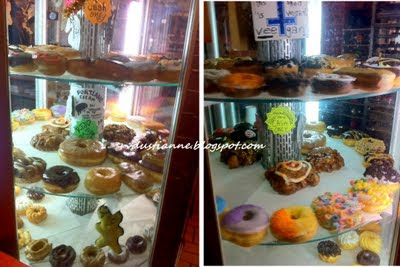 Posted by dustianne at 8:54 PM