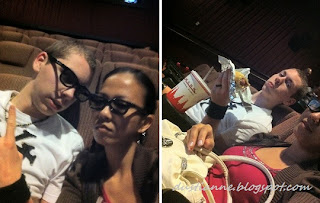 Its our date night and hubby picked me up after work then went to Mexican restaurant and had our lunch. Later that night,  hubby and I decided to watch Transformers 3: Dark of the Moon in 3D. When we reach the ticket booth to buy our tickets, the lady ask him, "two adults?" and hubby said yes...the lady was kinda hesitant as I can see in her face...lol. Then she gave us 3D glasses 1 for adult and 1 for kid...lol. Hello? She might think I am a kid? Good thing the glasses fit me well and as you can see in the photo, I just look like hubby's Math teacher...eh? lol.

Back to the movie, hubby thought it was pretty good but for me, the movie as a whole was not as good as i thought it would be i still think the second one (Transformers: Revenge of the Fallen) is the best of the trilogy. I also like the character of Mikaela Banes (Megan Fox) on the second one, She seems had an important character in the movie while Carly Miller (Rosie Huntington-Whiteley) is just hot pretty woman. Though the visual and sound effects were better since it was in 3D.
Posted by dustianne at 1:05 AM