Me as a pirate girl

So finally! After debating what I'm gonna be for Halloween, I end up wearing a pirate girl costume. It was princess Jasmin, Chunli, Tifa and pirate girl were my choices. Due to busy schedule and time,  I decided to make a costume which is less hassle, easy to put into without spending more bucks on your pocket ;). 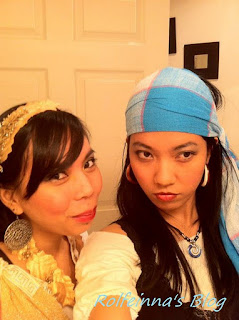 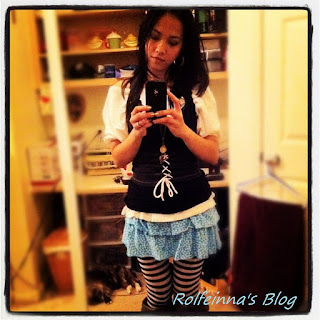 As my outfit, I wore a black lace tank top, a corset that I made (fabric was came from my old denim skirt),
an old white t-shirt from hubby, my blue wraffled skirt, blue scarf that I used as bandana, a stripe leggings from last year's Halloween, a boots and accesories :D.

I also made a Greek Goddess costume but hubby liked the pirate girl better since he was also a pirate. So my friend ended up wearing it ;) (as you can see the pic above).  I also made this one, its from hubby's old white shirt. I put a Greek pattern ribbon and sew it around the crew-neck and the bottom area of the dress. I also made couple accesories which adds up as a Greek Goddess Costume ;).

How about you guys? What was your costume? Did you made it yourself or buy it from the strore? Hope everyone had fun trick or treating! 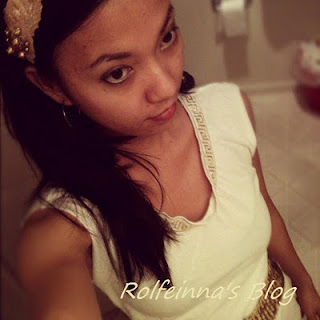