Me with Disney Princesses

One of the reason why I love Disneyland and I consider it the happiest place on earth because you get to see these different characters that you saw on animated film  particularly the princesses on their lovely dresses and costumes.  I got to meet Princess Ariel, Belle, Jasmin, Snow White and Tiana.  I am lucky enough to have a picture of them together. Unfortunately, Cinderella and some of the princess are the ones that I haven't get a chance to meet. Now if you're one of these Disney Princess, who would you be?

Since Halloween is almost here, I am planning to dress up like one of the Disney princess. I'm thinking Jasmin, Pocahontas or Mulan this time. What do you guys think? Let me know and I will make it happen :). 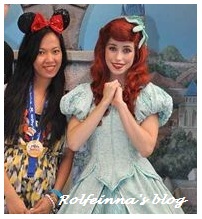 Me with Princess Ariel from the animated film 'The Little Mermaid'.
Ariel is a bright, spirited mermaid who is also adventurous and stubborn. Her curiosity and love for adventure sometimes gets her into trouble. Usually, however, Ariel overcomes any obstacle she faces like she uses magic to change things. 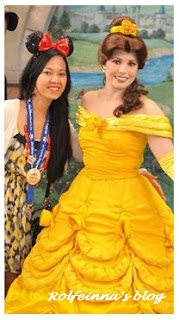 Me and Princess Belle from the from animated fantasy film 'Beauty and the Beast'. Belle is stunningly beautiful. Her most elaborate and renowned is her golden ball gown as what you can see this photo. She has gained a significant amount of intelligence over the years due to her love of books, providing her with a wide vocabulary, active imagination, and open mind. She is very confident and outspoken in her opinions, and seldom likes being told what to do. Unlike most characters in the film, Belle isn't concerned about her's or others appearances, and is able to look past how people appear and into their hearts. This is how Belle managed to break the Beast's enchantment, and restore love and laughter to the castle. 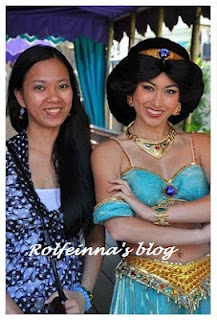 Me and Princess Jasmin from the Disney film  'Alladin'. Jasmine is an extremely beautiful woman with lustrous black hair, big brown eyes, and a distinct hourglass figure. She is headstrong, and longs for the freedom. Jasmine can also be kind and caring, and is considered to be clever and intelligent. She shows a love for adventure, and often accompanies Aladdin on his journeys. She is shown to have excellent fighting skills, possibly learned by adventuring with Aladdin. She can hold her own in a fight, and displays some impressive fighting skill. 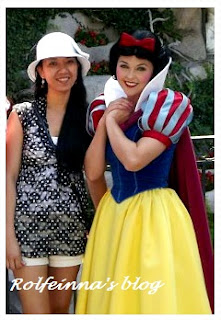 Me with Princess Snow White from the fairytale 'Snow white and the seven dwarfs' . She have a fair skin as white as snow, black hair and red lips. She is sweet, innocent, loving and kind. The "Fairest of Them All" who, in her innocence, cannot see any of the evil in the world. This makes her more vulnerable to her jealous stepmother the Queen who wishes to be the fairest in the land; however, Snow White's inherent kindness and purity inspire her friends. The forest animals and the Seven Dwarfs to protect her. She is both a protective mother figure and an innocent child in her relationship with the forest animals and the Seven Dwarfs. 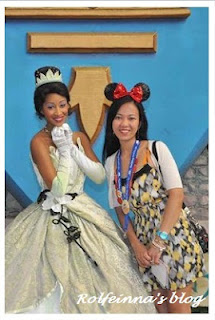 Me and Princess Tiana from the animated musical fantasy film 'The Princess and the Frog'. She's the first Disney's African-American princess. I just love her character, she is smart, hard working and independent young woman. She has held a passion for the culinary arts ( like me ^_^ ) and works two jobs in order to save money and eventually open her own restaurant.
Posted by dustianne at 9:51 PM